1 This information is provided by an independent service       provider 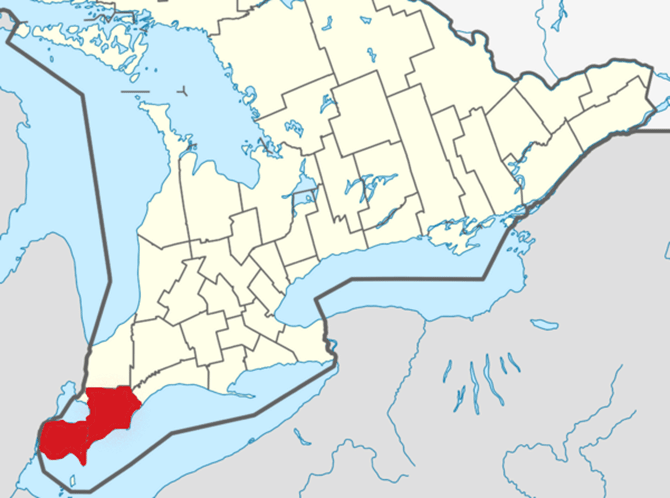 Ontario processing tomatoes are primarily grown in the field, whereas tomatoes destined for fresh markets are grown within one of the many greenhouses here in Ontario. 100% of the tomatoes grown in Canada for processing are produced in Ontario. The main growing area in Southwestern Ontario is Kent and Essex Counties where a unique combination of climate and soil has created an area ideally suited to the production of processing tomatoes.

Processing tomatoes are grown for three end uses: paste, whole peel, or juice. Paste will go on to be further processed into ketchup and sauces or will be canned along with whole peel products and juice. All tomatoes are processed less then 24 hours after harvest to ensure the product is as fresh as possible. There are approximately 6 processing plants in the region to allow for this quick delivery and processing. Neighbors in certain areas will coordinate planting and harvest with each other to be able to share transport resources and ensure all products make it to the factory.  Additionally, growers are regulated on when they can deliver products, ensuring there is never any waste due to an influx in delivery.

60% of tomatoes are made into tomato paste, manufactured during harvest season, and reprocessed internally to manufacture ketchup, soups, and sauces.

20% made into whole peeled tomatoes.

20% made into juice from fresh tomatoes.

A processing tomato is slightly different then what you find at the grocery store. Processing tomatoes are bred to have thicker cell walls and a bright red color. This provides multiple benefits to the grower and the product quality. Firstly, the thicker cell walls allow the tomato to handle the riggers of a mechanical harvest, meaning farmers and workers do not need to hand pick the product. Secondly, the tomatoes are bred to produce the desired viscosity and thickness for products such as ketchup. Lastly, the color allows for products to have its characteristic tomato red color that we all love.

Due to their delicate nature and the shorter growing season in Ontario, tomatoes aren’t planted directly in the field, rather seedlings (transplants) are grown in a greenhouse and then transferred to the field through automatic or semi-automatic transplanter machines. Ontario’s greenhouses supply all the required seedlings for processing tomato growers. The Ontario industry utilizes 100% transplants for planting. There are close to 9 acres of greenhouses used for transplants producing approximately 125 million tomato seedlings for Ontario growers. 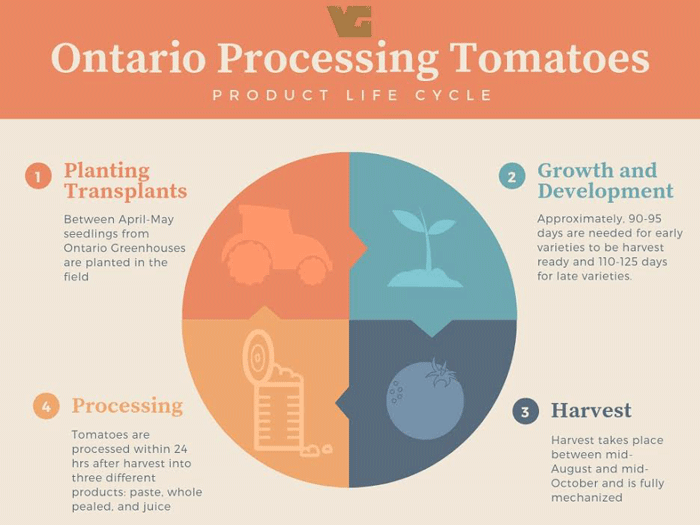 The seedlings are normally transplanted in April-May, as soon as the risk of night frost has disappeared. 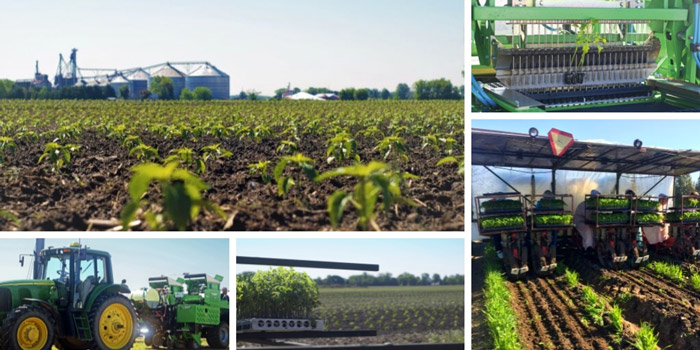 In 1988, there were 31,490 acres of tomatoes in production. Tomato acreage has steadily declined due to dramatic improvements in yield performance.  Yields can be affected by a variety of problems such as drought, hail, insect damage and frost. All tomato acreage in Ontario is measured by an independent third party, which also provides independent third-party grading to the industry each year.

Growers employ a wide range of strategies to provide the highest yield and quality possible. These include integrated pest management, crop rotation, drip irrigation, and cover crops to add nutrition back into the soil.

About 90-95 days are needed between transplanting and harvest for early varieties and 110-125 days for late varieties. While only approximately 5% of the surface is irrigated, as generally spring and summer rains are sufficient to cover water needs, drought conditions in the past has resulted in the strong focus on drip irrigation with significant grower investment being made in the 2002 season.

Harvest takes place between mid-August and mid-October and is fully mechanized. 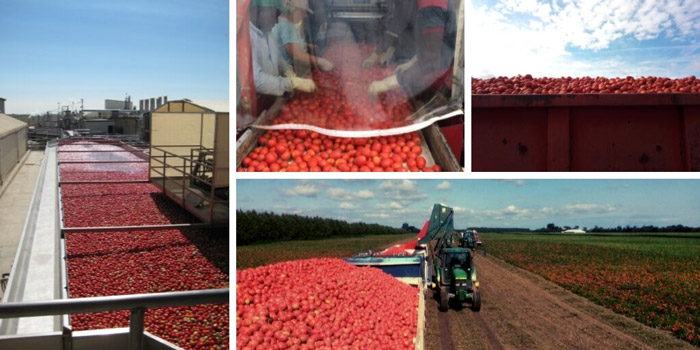 Once tomatoes reach the processing plant they are graded, assessed for value, weighed, and then unloaded to be taken into the factory. The majority of these tomatoes will be ripe since processing tomatoes have been bred to ripen at the same time. Unripe green tomatoes are sorted and left on the field to fertilize the soil or left in to help create a thicker, more desirable paste.

Tomatoes were discovered by early explorers in the 16th century in what is now known as Peru, and wild tomato plants can still be found growing in the Andes.

Around 1870, the first cannery in Ontario was established with processing tomatoes being made into soups and other items.

An important development in Canadian tomato farming in the 1900’s was researchion developing a type of tomato that could be mechanically harvested.  As technology and machinery advanced, scientists worked to ensure that tomatoes destined for processing followed.  This improvement came from agriculture research and brought large improvements over slow hand-picking.  It is estimated that approximately 2,000 field workers would have been needed to harvest growers crops; in the 1990’s, harvesting the same volume mechanically needed only about 450 workers. 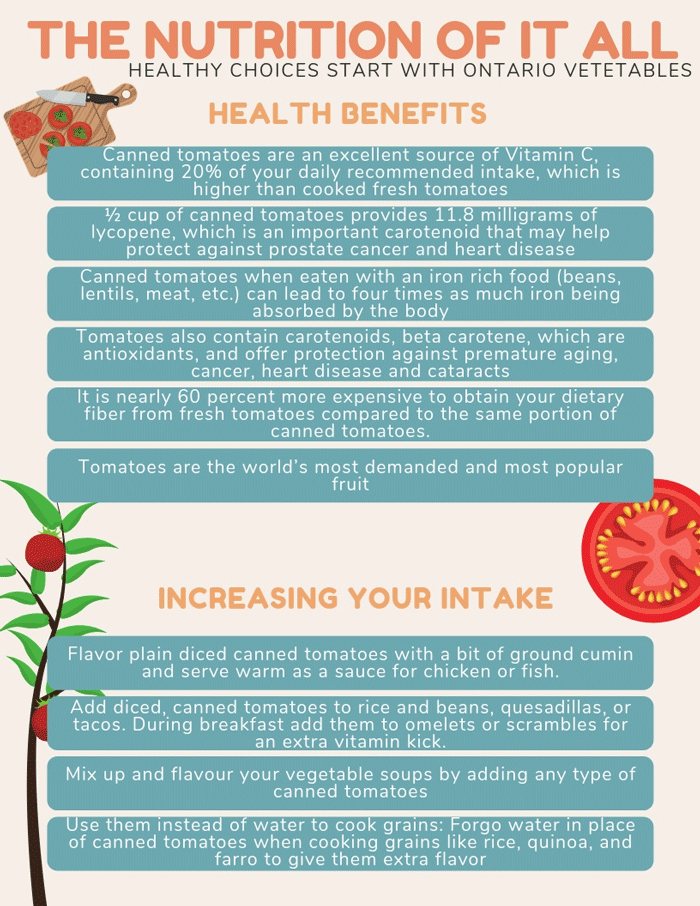 Lycopene and its Benefits

Lycopene gives more than just incredible colour to juicy tomatoes; it is also considered one of the world's most powerful antioxidants and contains disease-fighting properties thought to reduce the risk of prostate and other cancers. This hearty antioxidant may help reduce your risk of developing cardiovascular disease by reducing LDL ("bad") cholesterol and lowering blood pressure.

Lycopene, the disease-fighting power in red tomatoes, is mostly found just below the skin, but often ends up in the waste bins of processing plants. Tomato scientists at the Guelph Research and Development Centre are looking at ways to extract lycopene from the tomato processing waste (tomato skin) using innovative separation technology. The extracted lycopene is then used to develop health-promoting products for both the food industry and consumers - meaning exciting potential for a high value food product once deemed as waste. (Source: Agriculture and Agri-food Canada)